The 16th February 2017 saw the start of the legendary DUSI Canoe Marathon, which took place over three days and 125km of river and bush portages through the magnificent Valley of a Thousand Hills in KwaZulu Natal Provence, South Africa. The idea of racing down the uMsundusi and uMngeni Rivers was born during World War II when Dr. Ian Player, sitting with friends around an army campfire in Italy, proposed the idea of travelling by kayak from Pietermaritzburg to Durban. After an initial expedition was abandoned halfway in 1950, eight paddlers set off from Alexandra Park on 22 December 1951. Six days, 8 hours and 15 minute later, Dr. Player was the only paddler to finish, having survived two days of low rivers, a flash flood and a bite from a night adder. Ref: www.dusi.co.za. This unique race has taken place every year since and is now the subject to a movie ‘Beyond the River’, to be released in April 2017.

K2 crews William Irwin and Jim Mescal and brothers Jim and John Morrissey became the first Irish crews to brave the rigours of this extreme three day event, and in conditions that have since been described as the most difficult in 20+ years. 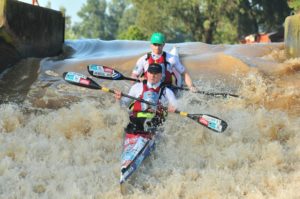 Day One saw both Irish crews start among a “batch” of paddlers with at least 20 completed DUSIs. As veterans of the Liffey Descent, the Irish crews were deemed by the organisers to have comparable experience. However, disaster struck a mere 800m from the start when the Morrisseys broke a paddle on Ernie Pearce weir. After clambering up to the road and standing in the middle of the bridge waving the broken paddle, eventually securing a replacement from a passing supporter’s van, they resumed some 20 minutes down on their compatriots. Further trouble included a 40cm split seam between the cockpits on Taxi Rapid. John, in the rear, spent the rest of the day manning the foot pump, an interesting challenge for a calf muscle under rehab since Christmas. The DUSI River from Pietermaritzburg to DUSI Bridge is a narrow river interspersed with rocky rapids of grade II to III level difficulty, the closest Irish equivalent being the Avonmore; a challenging course for fibreglass racing K2s. One of the main concerns on Day One was overcrowding at choke points, where more than one boat tried to access a narrow line down a particular rock garden. With the heat on Day One around 36°C, keeping hydrated was a real challenge, especially on the longer portages such as the 4.5km Campbell’s Farm and 4.0km Guinea Fowl portages, where re-supply from the support team was vital. William and Jim had a good run on the portages, but also endured considerable damage on the water requiring overnight repair. A pit stop facilitated a quick rudder repair on the Morrissey boat, while the brothers were sponged down by the support crew. Both boats would exhaust two full rolls of Gaffer Tape over the race’s first two days. 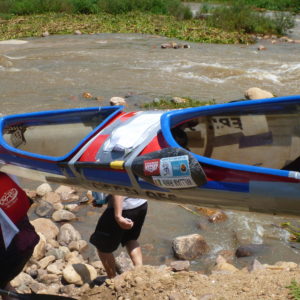 Day Two started with the crews collecting their K2s from the (very busy) repair shop, where the damage  from the previous days carnage had been fixed. The start was at DUSI bridge just after dawn giving both crews the option of a running start on the bank or a quick 500m paddle to the first portage. With 45k of river and bush portages ahead of them the crews had to focus on guiding their fragile craft through the myriad of river obstacles such as floating hyacinth weed islands and hidden rocks and boulders, with the constant search for clean lines down the dozens of rapid systems and weirs. As the day progressed, both crews, who had been paddling strongly at the racing end of their batch, experienced further damage to their boats with the most serious incident experienced by William and Jim when they wrapped their K2 around a rock, thankfully close to the end of the day’s white water section. Having repaired the substantial damage by means of using their spare set of blades as splints, secured by lashings of Gaffer Tape supplied by the support crew, they limped on to the Inanda Dam finish in high winds and exhausting heat. The Morrissey crew, with a more intact boat, revelled in the wild winds on Inanda Dam, reeling in some 30 crews on the 10km flat run to the finish. 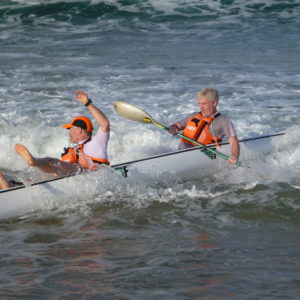 As dawn broke on Day 3, both crews again retrieved their boats from the kayak hospital and prepared for the early start. The transformation of Willie and Jim’s folded boat was incredible –   somebody had been hard at work throughout the night – while the Morrissey boat sported its third new bow of the week. With an accrued time deficit of some 30 minutes on their compatriots, Willie and Jim knew that they would have to put in a very big day to make up the time. Encouragement came with news that there would be no water release for Day 3, which added 21km of gruelling portages through hilly bush country and dry river beds to the proceedings. Anything could happen in 40C heat and 95% humidity. Straight from the gun, they were off and running, with the Morrissey crew taking the more conservative decision to walk the portages, after the initial 5k paddle, in excellent conditions, across Inanda Dam. The psychological and physical pain of this forced march was excruciating and the paddlers had to be constantly re-supplied with up to 10 litres of liquids and sponging to reduce the risk of exhaustion and dehydration, in particular during the infamous Burma Road portage. The portages were up steep river bank slopes, climbing several hundred metres, up and down lesser hills, over rocks through thorny bush, down gullies, through Zulu settlements and farms and up rough dirt tracks. Paddleable water was only accessed again when the river became tidal long after Pumphouse Weir, normally a torrent of clear flood water but now a desolate dry river bed.

By the start of the tidal section, Willie and Jim had made up most of the elapsed time gap on the Morrissey boat. Was this enough to make up for their disaster on Day Two or would the extreme effort on their 21km portage come back to bite them? Both crews hit the very windy tidal section with a vengeance and in true Irish style put their heads down and hammered into a near gale to the finish at Blue Lagoon on the Indian Ocean coastline just east of Durban.

First across the line were Willie and Jim, exhausted but elated on having completed such an epic DUSI. All eyes were now on the clock. The time gap between the two Irish boats after some 125k of racing, including 38km of difficult portages, and an elapsed time of 15 hours 57 minutes and 30 seconds was **** 7 seconds ***** with the Morrissey boat ahead by a whisper.

Commenting after the finish, Jim Mescal said that “this has been without doubt the hardest event I have ever taken part in”. When questioned about the effect of the very strong head wind from the Indian Ocean that seemed to unsettle the South African paddlers over the last 10kms, Jim Morrissey quipped “sure it’s normal for us Atlantic Ocean paddlers; we just put the head down and got stuck in”. 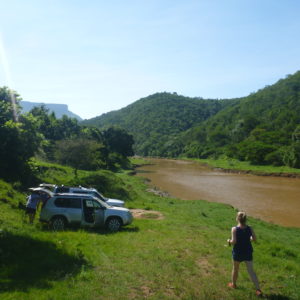 Both crews were backed up by their support team of Olivia Mescal (Moy Kayak Club), Mark Clinton (Salmon Leap Canoe Club) and the generous support and hospitality of Zoog Haynes, Stu Waterworth and Zulu-speaking Derek Howe from Pietermaritzburg. Support crews generally travel along the route with 4 * 4 off road vehicles supplying the crews with replacement hydration packs and sponging with ice water to assist recovery in the 40°C heat. While direct support is not allowed, repair materials, spare parts and replacement paddles can be provided.

Commenting on the event, seventh time race winner Andy Birkett proclaimed that this was his toughest race ever due to the drought-related lack of a Day Three water release from Inanda Dam. This resulted in paddlers being required to portage a 21km section of the day’s 36km, including the infamous Burma Road portage through the surrounding hills. What would normally be a 5km hike with the boat became an ordeal for crews through thorny bush country and dry river bed. 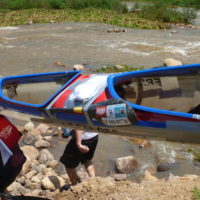 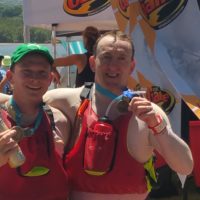 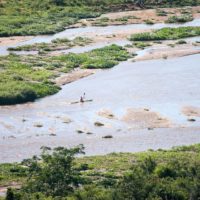 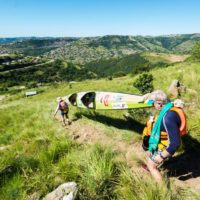 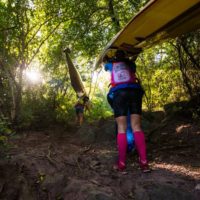 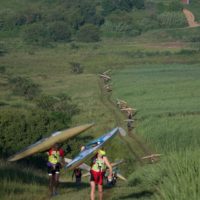 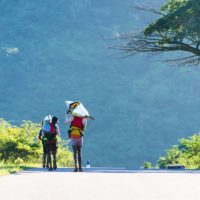 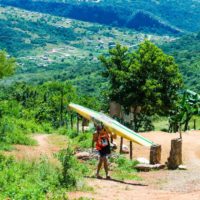 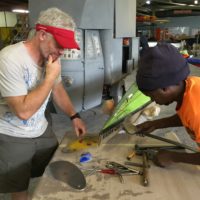 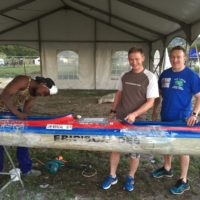 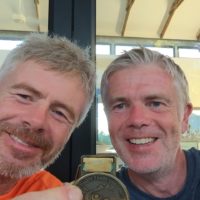 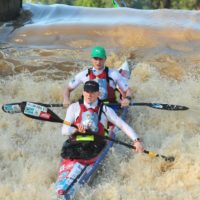 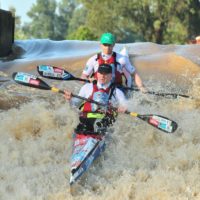 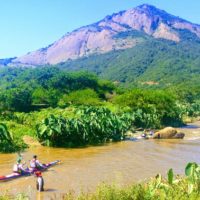 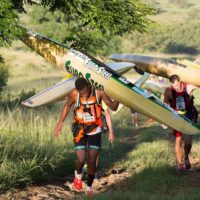 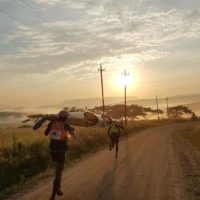 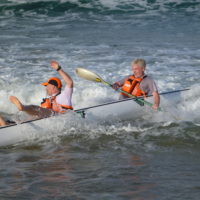 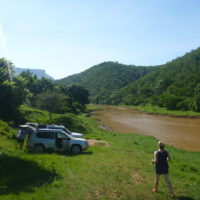 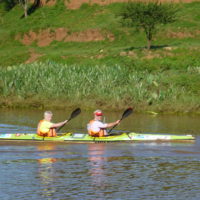