Terrific results for the Irish team in the heats of the Jun/U23 Slalom World Championships which started today in Bratislava, Slovakia.

In C1M U23, Liam Jegou in only his third competitive outing following his lay-off for hip surgery in March, put in a fast and clean run of 98.83secs in Heat 1 to finish 8th of the 20 paddlers to progress direct to the semi-finals on Friday morning. Then came Robert Hendrick who put in a super clean run of 102.57secs to take 15th place and qualify direct.

Jake Cochrane made an error half-way down the course on his first run which saw him miss an upstream gate and put him well outside the cut. So as one of the remaining 42 paddlers, Jake went into the second run knowing he had to make top ten to progress to the semis, a very high-pressure situation for him. He rose to the occasion and put in a very solid clean run of 102.25secs to take 8th position and earn his place in the semis.

In the C1M Junior class we fielded two paddlers who were making their debut at this level of competition – James Gibbons and Sean McLarnon. In their first run, both paddlers missed gates on the end section of this very difficult course and put themselves under pressure to make top ten of the remaining 30 paddlers in the second run. James put in a very good performance to finish in 7th place and book his place in Friday’s semi-final. It was not to be for Sean who again had major difficulties on the bottom section of the course and unfortunately did not progress beyond the heats. Sean has this experience in the bank now for the next few years of participation.

So, all three Irish U23’s in the 30-boat field for Friday’s semis and they are joined by James Gibbons in the Junior semis. A terrific and historic result for an Irish team. One which showcases the strength of C1 paddling in Ireland and bodes well for the future.

Tomorrow is the turn of Caoimhe O’Ferrall in U23 C1W and Oisin Farrell, Eoin Teague and Sam Curtis in U23 K1M. Good luck to all and you can follow their progress on https://www.canoeicf.com/canoe-slalom-world-championships/bratislava-2017 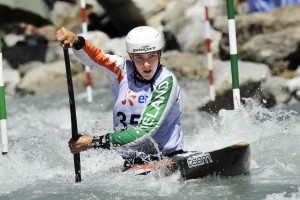